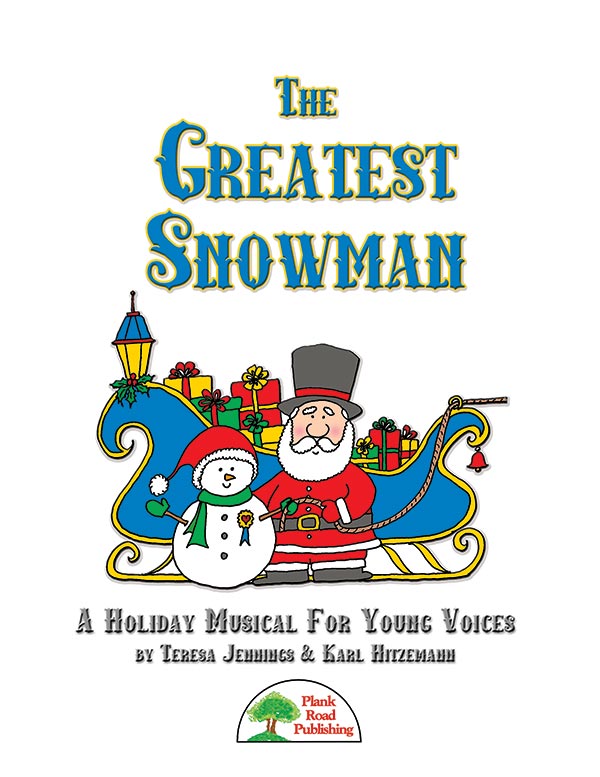 by Teresa Jennings and Karl Hitzemann

A Holiday Musical For Young Voices

Every 100 years, Santa Claus takes Christmas off. (Having been around the world thousands of times, he's really looking forward to a staycation. Who could blame him?) The tricky part of this is, of course, finding a substitute to take over his Christmas Eve duties, namely delivering gifts to good little children all around the world - in one night. It's a challenging task, and choosing the right replacement is equally challenging. Toward this end, Santa accepts applications and resumés from hundreds of candidates that he must then sort through. Surely one of them is great enough to win the honor.

As our story begins, some of the final candidates are interviewing for the job. Amongst them, we see expected characters like reindeer and elves, but we also note that there are other animals such as polar bears, tigers, and even penguins in line. Not to miss an opportunity, the Easter Bunny and the Tooth Fairy decide to try their luck as well. (Even the New Year's baby, Cupid, a leprechaun, Uncle Sam, Lady Liberty, a pumpkin, a turkey, and a pilgrim are rumored to make an optional cameo in the scene.) Santa certainly has a difficult decision to make!

At the end of the line, we see a little snowman standing alone. A rather shy and quiet character, he seems to be the subject of some disagreeable comments from the others. They are quite rude and imply that he hasn't got a snowball's chance of getting the job. He is not daunted by their bullying, and in fact, only sends them loving thoughts in return. Santa witnesses the exchange and is touched by the snowman's big heart and gentle nature, despite the unpleasant circumstances. As you might imagine (since this is a happy, positive message musical), Santa is so impressed that he chooses the snowman to take his place on Christmas Eve. Not only is he found to be great enough for the honor, he truly is… the greatest.

As with all of our revues and musicals, there is a thoughtfully designed Teacher's Guide, with lots of suggestions for making a great performance. Also included are reproducible Singer's Parts, lyric sheets, posters, and program covers. 15 speaking roles (some can be combined to make a smaller cast), and any number of non-speaking roles.

Song Title
Player
Every Hundred Years, Santa Takes A Break
Script 2
Pick Me, Me, Me!
Script 3
Snowman, Why Are You Here?
Script 4
Jolly Old Words To Live By
Script 5
The Greatest Season

My Planet, Your Planet

How To Train Your Reindeer (To Fly)