"Earthlings, Unite!" was written as part of the musical revue My Planet, Your Planet. That doesn't mean, however, that it must only be used that way. As with most of the songs in our revues, we design them for flexibility. Any program that speaks of the environment, Earth Day, global warming, etc., would be an appropriate venue.

This song advocates the message of unity in our global efforts. No matter who we are or where we live, the fact of the matter is, we are indeed all earthlings. This planet is our home and our responsibility. Working together to "make things right," as the song says, isn't just common sense. It may literally be necessary for our survival.

The most natural use of the song is to further inspire discussion, if not action, amongst your students, your school, and even your community. And if the subject of just environmentalism isn't enough, let music bring science across the curriculum. The song speaks of the rotation and revolution of the earth, which the lyrics also playfully refer to: "...do we just go 'round and 'round and 'round, rotating and revolving?" Science and food for thought.

It's unlikely your students wouldn't understand that "twenty-four seven" and "three sixty-five" mean 24 hours a day, seven days a week, and 365 days a year. But it doesn't hurt to bring it up. It might also be a good time to talk about the fact that sometimes, there are 366 days in a year. (When? Why? What is it called?)

The music for this tune is particularly neat. It's a pop shuffle, which means that the eighth notes are triplet based. The vocal part is all in unison and the lyrics are quite memorable, so it should be easy to learn. Because it's a pop tune, our vocalists on the Performance/Accompaniment recording have done a bit of stylizing. Some scoops are added to the music where they did this naturally. You can let your singers also scoop or not, as you prefer.

We would suggest that you work with them to learn some of the musical details, such as crescendos, decrescendos, dynamic changes, and stagger breathing. Notably, at measure 32, you'll see the indication, "no breath before D.S." That means that the words "Yeah yeah!" should be sung right into the first "'Round," at measure 5 on the D.S. without taking a breath. Also notably, at the end of the song, everything gets gradually softer and softer until the last measure. Subtleties like these will add a lot to your performance and make your singers feel and sound more polished.

The instrumental tracks for this song are just delightful. A little campy, a little hip, and of course, well played, they are worth taking the time to listen to for fun. As you will hear, we used our usual talented cast of characters, including a rhythm section, winds, and strings. Worthy of note - there's an oh-so-nifty countermelody in the upper winds starting at measure 9 on the D.S. However, we think the tubas have the best part at the chorus (starting at measure 25 and again in the coda). They play more of a lilting harmony line than a bass part. And it marries so nicely with the halftime shuffle beat going on there. Point it out to your students, and we're betting they - and you - wind up humming it to themselves long after the fact. (We did. And still do.) 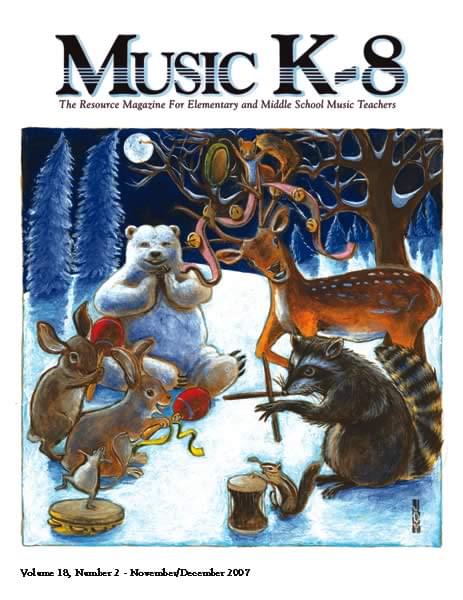