Dweller Of The Cave

The first and most important thing you need to hear about this song is... don't panic! At first glance (or first listening) it may seem a bit intimidating. The fact is, it is much easier than it looks or sounds. Part 2 may be the most ominous of the parts, simply because it is usually for those uncertain youngsters in the lower range. But, you can be sure that throughout, the part 2 (which is always the lowest) is simple enough even for more difficult cases.

The piece begins with part 2 chanting in a half whisper. There's no challenge to that at all. The "ah's" in part 1 are divisi after the first time. They, too, are simple, but if you don't want to add them, they are doubled in the synthesizer with an ethereal treble sound, so you could leave them out. When the lyrics start at measure 29, part 1 stays on the middle C until the last bar of the phrase. The "ah's" in part 2 begin one at a time and are also doubled in the synthesizer line. The third of these is the solo line, so you only need one singer. But, it is also optional, or you could use more than one singer.

When the chorus begins, one bar before 48, part one and two are in octaves - there is no harmony to worry about there. It stays that way until it repeats back to measure 6 (with the pick-ups to the chant just before the D.S.). When it goes to the coda, the third part is re-introduced, again with a soloist or small group of singers. It is also doubled on the synthesizer, as are the other two.

The only possibly challenging portion of the piece is the contrapuntal section at measure 67. While listening to the tape will be most helpful in learning parts 1 and 3, part 2 would be best taught at a keyboard. One helpful hint: part 2 is the same line over and over throughout the counterpoint, making it a breeze to learn. Only your soloist(s) needs to learn part 3, and you can teach part 1, which is not too difficult, at a keyboard, too.

The tune winds down, getting quieter and quieter until it is merely a whisper, ending as it began, with just part 2. The synthesizers and percussion complete the piece for several seconds past the vocals.

Even though we have provided the piano/vocal score to this piece in this issue, we strongly feel that it can only be truly effective if the tape is used. We have gone to great lengths to provide the special effects, and your students will appreciate them very much. (We believe this so strongly that we are making the cassette of this tune alone available for your students to purchase. See page 61 for details.)

Things to discuss with your students: 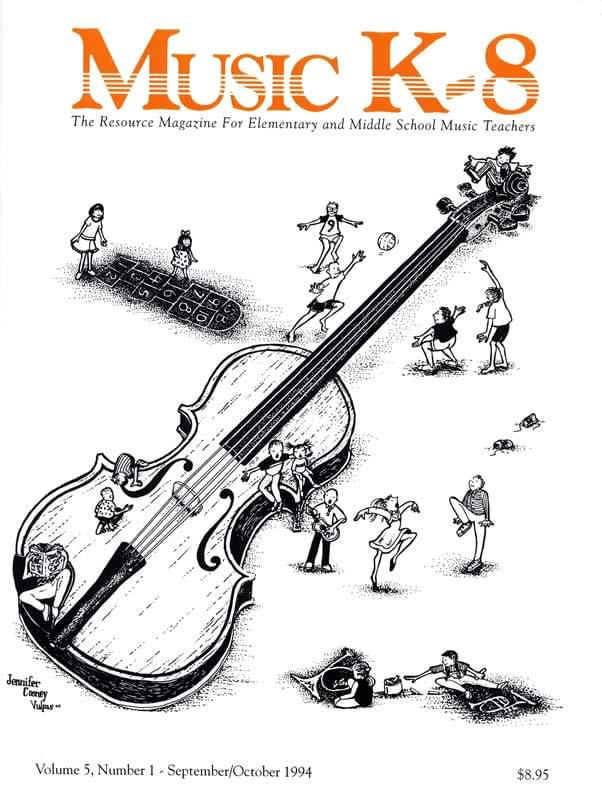