We Go For The Gold!

The song "We Go For The Gold!" was originally published just prior to the Summer Olympics in Atlanta, Georgia, many years ago - 1996, to be exact. It has been one of our very favorites all along, and since we had room in this issue, we were tickled to be able to share it once again as a "Flashback" piece. If you are doing an Olympic focus, we think it might work nicely in tandem with the opening song of this issue, "Let The Games Begin!"

The vocal part is printed in this magazine, but the piano/vocal, which is quite long, can be found on our web site. (The box following this article gives the details.) Unfortunately, since this was produced so long ago, we did not break out the parts as we do with songs now.

Following is some of the copy we wrote when we first published this piece. We think it still applies:

The catch phrase "go for the gold," is certainly synonymous with Olympic victory. But because the song never mentions the Olympics specifically, it can be used for any event you deem appropriate. You might wish to use it for pending championship games or tournaments with which your school is involved. Or maybe you could use it at your graduation. However you program it, you can be sure your students will be winners.

The style marking is "enthusiastically majestic," and that pretty much says it all. While it is playable on piano, and we have provided a piano/vocal score, the brass fanfare sections may be a bit difficult to play as written. If you are not using the P/A recording, you will probably want to adapt these parts for ease of playing. Similarly, measure 9, measure 42, and measure 88 are not easily playable as written. In these cases, you can simply play the quarter note chords on each of the four beats.

As you might suspect, we highly encourage you to use the recording for a number of reasons. First of all, it's a wonderful orchestration and adds to the grandeur and majesty of the song far more than a piano alone could do. Secondly, it was conceived as a brass and percussion piece with vocal melodies, so that is the way it sounds the best. Also, we provide extremely high quality production, using live instrumentalists playing real instruments for you and your students to experience. If we could have invited all of our subscribers, customers, and students into the studio to hear this song on a top level sound system, we would have. We had a great time with it!

The intense multiple snare drums (reminiscent of a drums corp), the timpani, chimes, and concert bass drum lay a percussive foundation for the song. The brass choir captures the energy from the very first measure and keeps the intensity throughout. If you have the recording, make it a point to play just the instrumental tracks for your students at least once. There is so much fine musicianship going on here, you will want to share it with them. (You might also want to let them know that all of the musicians they are hearing on our recordings are making a good living with music. The children are still students, of course, but many of them also work regularly as music professionals.)

Though the length of the song, in terms of pages, is more than the average tune we publish, it is repetitious enough to learn easily. In fact, if you wanted to use it as a unison, it absolutely will work. Parts 2 and 3 are optional, as always.

If you do use part 2, you will find it is written for your lower, changing, or changed voices. Even though it is still in the treble clef, your older boys will appreciate having a part just for them. It might also interest them to know that their line at the chorus each time echoes the brass melody. They could even claim that they have the melody at that point, and they wouldn't be wrong. Again, if you wish to use the song as a unison song, you can certainly switch your part 1 line to the part 2 line at the chorus if you feel the melody is more comfortable for your students to sing. There are no rules. Adapt it as you wish.

Part 3 enters at measure 65 after the key change. This part is optional, as mentioned. If you use it, you could have it sung by a soloist or small group or an entire class. Most of the line is doubled throughout in various winds on the recording, which you can use for reinforcement.

The last note the kids sing at the end of the song includes an optional divisi in all three parts. Pick which notes you would like to sound first, then add to them as your situation allows. You'll want to think carefully about letting your soloist sing the high F#. If she has the range comfortably, that's fine, but don't make her strain herself!

One more thing about this song. There's an old saying that goes, "It's not whether you win or lose. It's how you play the game." In this fast-paced, highly competitive society, that lesson is often lost or forgotten. Even in the Olympics, the message needs to be that the effort to achieve personal excellence is the important part of the competition. That sentiment is stated several times within the context of this song and we encourage you to discuss it with your students. Discuss other elements of the lyrics as well (if time permits) such as honor, dignity, pride, triumph, sincerity, integrity, and truth.

Online extras - The free, downloadable extras mentioned can be found under the Graphics and Extras for Volume 18, No. 5 at MusicK8.com 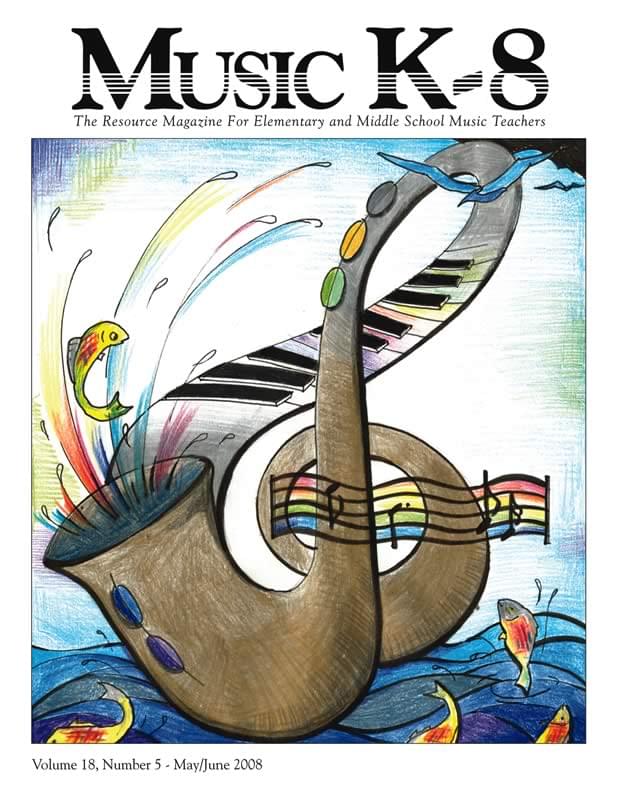