Tielman Susato was perhaps the best known of the Flemish Renaissance composers. He lived in Antwerp from c. 1500 - c. 1562, and was a talented composer, instrumentalist, calligrapher, and the first music publisher of the Netherlands. As a publisher, he not only published his own prolific output of music, but also the works of other composers of the day, notably including Clemens Non Papa and Lassus.

While much of his music was vocal, including several masses and motets, today he is probably most remembered for his instrumental music, much of it in dance forms.

The melody you find in our "Renaissance Dance" is one of his best-known melodies, and can be found as a ronde as well as several other dance forms in other tempos and time signatures.

For our arrangement, we have made the recorder the center of attention, accompanying it with a fine brass section, great strings, harpsichord, lute, and frame drum. Okay, that isn't exactly a Renaissance instrumental sound, but it does capture the flavor in the form of a later arrangement. Sackbuts are hard to come by, though recorders are most authentic.

There are two different recorder parts: A, a more difficult part close to the melody of the song; and B, an easier part of mainly quarter and half notes using low E, G, A, B, and C. We have recorded four different versions of the tune, showing both of the recorder parts at a slower tempo, and just the accompaniment tracks in two different tempos.

Lastly, we have included a simple frame drum part, bottom left, in case you want one or more of your students to accompany you. Note the measures in which to rest. There is also a piano/recorder score available online at MusicK8.com See below for details.

Online extras - The free, downloadable item mentioned can be found under the "Graphics and Extras" for Volume 17, No. 5 at MusicK8.com 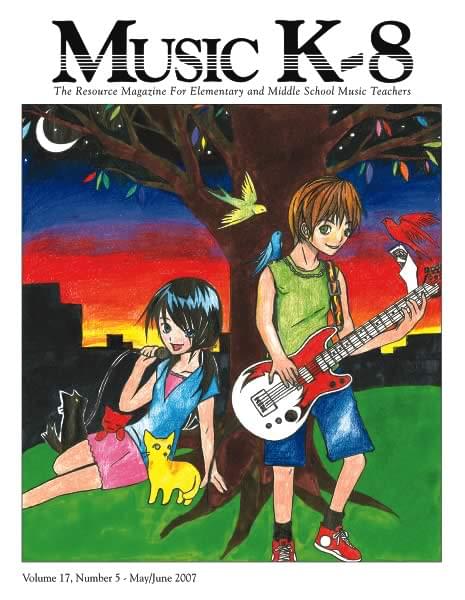