The Music Of Life

This song is rather versatile in the ways you could use it with your music program. It speaks of nature, life and music, so you could feature it in your spring program, use it for your Earth Day focus, or even as an emphasis for Music In Our Schools Month. Of course, you could also just use it in your classroom for the fun of it. It's a very lively, infectious tune with a latin beat that your students will pick up easily once they've heard it.

On the P/A cassette, you will hear a latin rhythm section, reminiscent of calypso music. We have included piano, bass, drums, acoustic guitar, electric guitar, congas, shaker and pitched cowbells. The "groove" this combination of instruments provides is delightful! It might be everything you can do to keep your students from moving when they hear it!

The melody is simple and repetitious, so it shouldn't pose any challenge to teach it during the unison sections. There is a second part which enters at the D.S., but it is optional. You could divide your class(es) to cover both parts, or you could assign part two to a small group of "select" singers for ease of teaching and learning. (Not to mention "showing off" some of your better singers!) There is also an optional divisi of the sustained notes in the coda. Again, use your best judgement when deciding which students will be singing which pitches.

Besides the rhythm section, the most notable part of the background is the flute, which is featured in the introduction, during an improvisational section and on and off during the song. If you are not using the P/A cassette and you have a flute player who can play this part, it is provided within the piano/vocal for your convenience. Even if you are using the P/A cassette and would like to have a featured flute player, he or she can simply play along with our professional flautist! During the solo section at measure 34, if your performer stays within the chord structure to improvise, it will work out quite nicely with the recorded solo.

Also during the flute solo section, you could introduce some simple movement by the whole group or selected individuals. If you are using a flute soloist, however, movement soloists might upstage him, so keep that in mind. Another thought would be to add your own percussionists at this point to spice up the visual aspect and offer hands-on playing for some of the students. Simple instruments and rhythms could be used, or you could get downright carried away! Your students' level and abilities will dictate your choices. As always, ask for their input when making such decisions.

At measure 49, there is a four measure "nature sound" section which is played eight times. In cut-time, these eight times actually go past pretty quickly, so make sure your students count carefully. To help them, the E flat is re-articulated on beat one of the repeat each time until the 8th time, when a

B flat whole note is played. On the P/A cassette, our young singers have wonderfully demonstrated the fun students can have with the rhythmic performance of each of the animal sounds during this section. You will note that we have suggested rhythms for the entrance of each "critter" so as to easily hear each one as they join the chorus. However, you and your students should feel free to alter the rhythms, the types of creatures, or any other aspect of this section to suit your situation. For example, if you are performing this song in a concert, you might want to have students in costume enter to represent each of the new sounds as they come in. Let your students audition for each of the sounds, and don't tie them to traditional noises if they are feeling particularly creative. In our version on the cassette, for instance, you will notice that the frog does not fall back on the old standard, "ribbitt."

The first time through this section, the first sound to enter is the rainstick. We have not included that sound on the instrumental tracks on side two of the P/A cassette because we wanted to give your students the chance to add their own! The idea is to keep the sound constant through this section, so you might even decide to use more than one rainstick. Make it a class project to create rainsticks if you haven't already, and be sure to involve the classroom and/or art teacher. A long cardboard tube stuck with a lot of pins or straws and filled with rice is a simple recipe for a rainstick. Be sure to tape the ends well. 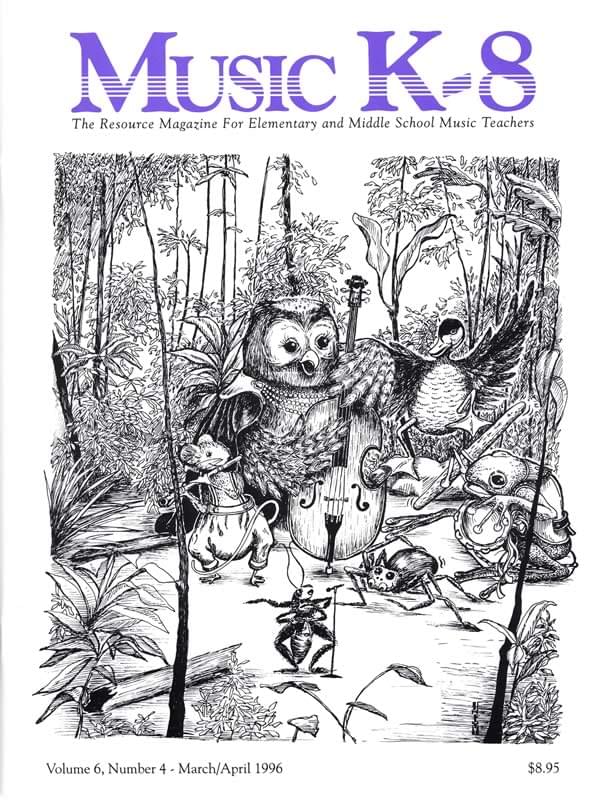