The Only World We've Got

The most important thing I can tell you about this tune is: use the Performance/Accompaniment cassette! If you don't, then don't try to perform it, unless you've got your own rock band standing by waiting to make it happen. In that case, the scream guitar solos, drum fills, etc., are marked on the score. Good luck.

This is the third song from the musical revue, Together. The first two ("Together," and "We're Not That Different,") appeared in the first issue of this year, Volume 5, No. 1. In the next issue (Volume 5, No. 3), we will be presenting the last tunes, the script and teacher's guide to complete the revue.

As you may have surmised, the main reason I am so adamant about using the cassette for this song is the use of the scream guitar throughout. You can't do that on a piano. Sorry. Besides, if you let your kids hear the tape, it will reach them pretty quickly because it speaks their language. There is, as always, a message to the music. It will be put into context when the script comes out. However, the song is strong enough to stand on it's own, if you don't plan to use it as part of the revue.

The range of part 1 is deliberately low, so that your singers can belt in a rock style chest voice. Our kids (in our recording session) did this easily, learned it quickly and enjoyed the heck out of it. (We'll talk about vocal range and tessitura some other time.)

The claps, which begin at measure 11 and come and go throughout the song, are every other measure. They could be done on every measure, but I think it's more effective the way I wrote it. Your choice.

In measure 35, the words "Pull together," can be sung in a sort of an exaggerated "synthesized" style with a crescendo starting from almost nothing on every syllable. The ethereal synth choir behind the vocals on the tape will help this. (Be sure to point out the two basses playing at this section to your kids. One is an electric bass. The other is a synthesized bass. Together, the effect is cool.)

Along these same lines, I think it would be great to play just the tracks side of the cassette so that your students can hear everything that's going to be going on under them. Once they start singing and rapping, they'll never be able to hear it all. It's worth listening to. As usual, a session of listening and identifying the various elements of the piece will make for a good learning experience. For example, while the scream guitar is pronounced, there is a second guitar as well. Can they hear it? What is it doing? (Mostly, it plays the chords with the winds.)

In the case of all rapped parts, inflection is everything. Again, the example set forth on the tape is invaluable. Don't let your rappers get too "sing-songy," - tell each one of them to put extreme pitch inflections in every phrase, high to low, low to high. Keep it hard and little bit angry for the best effect. You'll note that only part 2 starts the rap at measure 43. These should be your lowest voices. Part 1 only joins in on certain phrases, like "and woman." Speaking of which, the word "woman," is deliberately pronounced differently. The first syllable, "wo" is meant to sound with a long "o" - "woe." There are also "less than correct" grammatical usages in the song. Don't let them bother you. You can certainly discuss them (Hey! Bring in the classroom teacher for a little across-the-curriculum English lesson!), but don't change them. "You gotta" is not correct, but it's common and comfortable and works a lot better in this song than "you've got to." Go ahead. Let your hair down. Live dangerously...

At measure 59 (the coda), there is a 16 measure screaming guitar solo. (I don't think you're ever going to have to get your kids to try to identify the scream guitar on the tape - it's pretty out there.) During the solo, your students can add their own movement and/or dance steps. If you have any solo dancers in your midst, what a great time to feature them. If not, and if you are timid about movement, you could simply have your kids bounce or sway naturally to the beat. One student could "play" a real or imitation guitar during the solo. Let him or her dress as a real rocker might (they can tell you what this is!), and act out accordingly for those 16 bars.

As soon as the solo is over, the rock march begins at measure 69. Use this time to have your soloists and group soloists (if you divide it up that way) march into position. A row of soloists at the front of the performance area might be very effective. As each soloist delivers his/her line, he could take one step forward. Be sure to tell them to project clearly so that the audience understands what they are saying. A microphone might be more of a hindrance than a help because the need for each child to be in front of it in time could cause complications. Try to avoid using one, if you can. I also recommend that you keep the group that says "stinks" stationary.

Okay, time to discuss that word. Originally, I wanted to use a little harder word (you know the one), but well, I can't do that, and you know it. I want you all to keep your jobs. Even though it's an active part of all of your students' vocabulary (probably thanks to the likes of Bart, Beavis, and the other "B" guy...), I don't think it's wise to perpetuate its use as a common and acceptable thing for kids to say. So, I have used the next best (worst?) thing: stinks. There may yet be some of you who think that is a little strong. Personally, I think it's fine, but you do what you must. You could eliminate the response of the group entirely, only stating each solo word, like "war," "poverty," etc. Or you could try to come up with another answer: "is bad," "hurts," whatever. Maybe your students could think of something as a group activity.

Right after this section, there is another four measures of screaming guitar stuff. During this part, I have suggested that all of your students put their hands partially over their ears (just cup them) and pretend to scream. The key word here is pretend. The guitar is doing the screaming for them. It should come out pretty dramatically.

If you decide to do this song, remember: it is easy and mostly unison, despite its length. Your kids will learn the form after only one or two listenings. 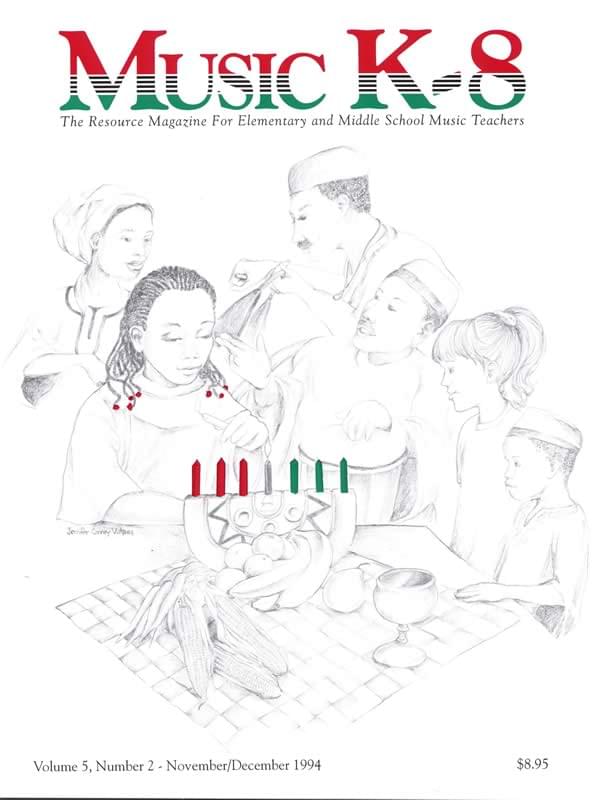