March Of The Abominable Alien Aardvarks

I had a good time with this one, from the concept to the title to the lesson I wanted to tie to the way the work was written. I like funny titles, titles that make the players think, and titles that roll off of the tongue with some distinction. I wanted a march, sort of sci-fi, and I settled on the aardvark as the funny creature in question. Then it was time to compile a huge list of adjectives that start with "A". After a couple of days it evolved. It just wouldn't be the same with Adorable Antique Aardvarks... or Ample Asthmatic Aardvarks.

It's Whole Tone... or none at all - When you first play the tune for your class, they will know that it sounds a little bit "alien," a little like it could be played behind a movie scene full of odd looking little creatures. Why it sounds a little odd is because the whole work is created with whole tone scales.

Even if you weren't a theory/comp major – who would be :-) – you probably ran into whole tone scales as you studied the Impressionists. It consists of scales (and there are really just two of them) made up of all whole tones between each note and the next. The first one in this piece is loosely based around A: A B C# D# F G. The A more or less acts as the tonic, while the other scale, based on E, sort of acts as the dominant.

It's a great lesson on scales - Depending on how much music theory you discuss with your classes, this may be a great way to look at the different sounds of different scales. Play a major scale for them, then a couple of minor scales. Play a chromatic scale, perhaps, or a jazz/blues scale. Then play the whole tone scales. They will hear the difference.

Quite often, works that are based on whole tones feel ethereal, because they don't feel like you are ready to settle at any point. You really don't hear the finality of a V-I movement. You can feel tension and release, and that's what we have tried to accomplish with this march.

To further accentuate the demonstration, play some sections of works that use whole tone scales, like Debussy's "La Mer." Then play something in a major key (maybe Sousa's "Stars And Stripes Forever"), something minor (say Grieg's "In The Hall Of The Mountain King"), and maybe even something using a blues scale. There are a million tunes that could be used, from "Saint Louis Blues" to Herbie Hancock's "Watermelon Man." (Check out the subject "Blues" on Wikipedia for some quick recordings if you don't have them in your own collection.) If you want to get even deeper into scale discussions, try some music using Indian or Middle Eastern scales in their melodies.

Oh, yeah... recorders - Lest we forget - this is a recorder feature. There are two parts: Recorder 1 requires G, A, B, and C while Recorder 2 uses G, A, B, plus low E. The tune can be played successfully with just the first part, but it's much more fun with both recorder parts.

You will note that under the final fermata, many of the orchestral instruments play "alien" sounds, ad lib. Feel free to invite your players to join them, hopefully improvising creatively, maybe with such effects as just tonguing without producing a pitch, by using the recorder as they would a kazoo, or by making clicking sounds through the recorder. Most of all, though, have fun with it! – PJ

You may find it interesting to see the orchestral reduction that acts as a performance score for this work. You will find it with the many optional downloads available for this issue on MusicK8.com 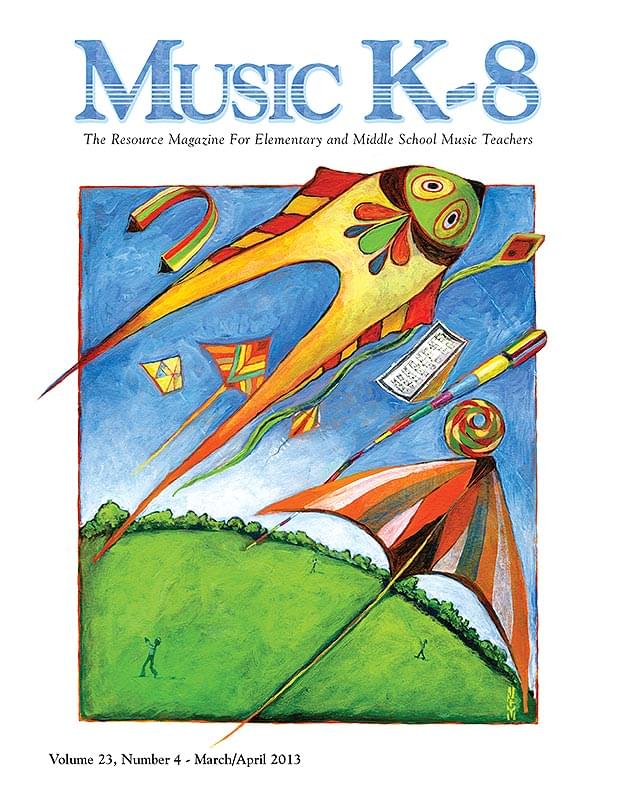