During the last modern resurgence of Kenton's band in the late 1960s and through the 1970s, they had a special connection with high school and college jazz band programs. They toured to many campuses, and their summer camps captured the imaginations of many young players and writers. And since many of the band's arrangements were published through Kenton's publishing concern, Creative World, many college bands played the same music.

Among the writers who became connected with the band at this time was Hank Levy, the director of the jazz bands at Towson State in Maryland. His specialty was composing pleasing, melodic tunes in unusual meters such as 5/4, 7/4, and 9/4. This piece is a tribute to this great writer whose tunes are still fresh today. (Go to iTunes and check out "Time For A Change," "Decoupage," and "Samba Siete." Fun music!)

After a Levy-style intro, we go into a relaxed setting of our old friend, "Merrily We Roll Along," this time in 5/4. It's a perfect way to let your students try 5/4. If they haven't played this meter before, start by having them clap quarter notes while saying "1-2-3-4-5" putting a slight accent on 1 and 4. Then have them play just the melody of the song without the tracks until they get the feel. Listening to the recording will help them get used to it.

Probably the only tricky part of the tune comes toward the end in the rhythm that starts with the ensemble in bar 29, and then is picked up by the recorders in bar 30. Hearing it a few times will help them get it in their minds.

The end features optional odd sounds, or "time travel music" played over the low chord in the trombones. In the studio, we let the players make any sound they liked as long as they didn't play a full sound, so you have clicks, pops, and just air. Makes for an interesting effect. You can set your own ground rules for your students to do this as well. Note that we have placed a recording of the tracks on our web site that does not have the sounds made in the studio. This gives you flexibility. Also note that both recorder features in this issue have optional alto recorder parts, each ideal for beginning alto players. The tunes work fine without them, but they are kind of neat if you have the players. And if you want to hear sample recordings with just soprano recorders, we provide those as well, also on our web site. 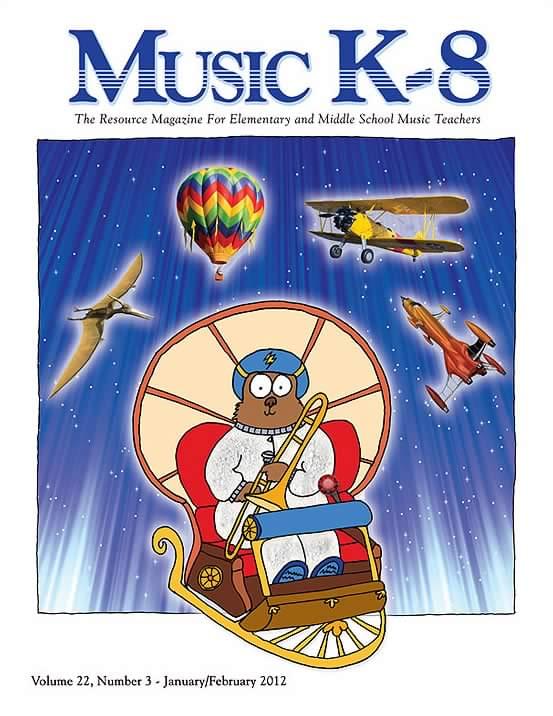