We've all heard songs about Thanksgiving that focus on the Pilgrims or turkey or grandma's house, but have you ever heard a song that focuses on the ship that carried the Pilgrims across the Atlantic? Neither have we, which is why we thought this song would add a fun and historical (a.k.a. "cross curricular!") angle to your Thanksgiving celebration.

"On The Mayflower" is a lighthearted song with a sung chorus and a lot of spoken lines. Ideally, you'll need 16 people for spoken parts, including the Ship's Master, crewmen, a swabbie, and the conner. (If you're short on personnel, it's okay to double up on the crewmen's lines.) Since the Pilgrims were English settlers, we decided to perform the spoken lines with British accents, though not every kid can do this. Have them do the best they can. (If it makes them feel any better, you can tell your students that not all of our studio singers could do the accent, either.) When performing the lines, it's okay to "step on" (or overlap) the line before you in the interest of getting through the script. A good example of this would be while the crew is still guffawing about the helmsman not being able to see where he's going, crewman 11 begins his line.

Stylistically, this song is sort of like a pirate song, so sing it with gusto! Where it differs from a pirate song is that instead of a lot of pirates saying "Arrr!" we have a lot of crewman saying "Aye!" (Though John did include one "shivered me timbers" reference. He couldn't help himself.) Also note that for this song, the "flower" in the sung "Mayflower" is one syllable, so it sounds like "Mayflour."

If you have ambitious designs on having a backdrop for your performance, remember that the Mayflower was a square-rigger ship with six sails and no steering wheel. As far as what the crew should wear, try breeches, stockings, leather boots or shoes, linen shirts, and caps made of wool or felt for the men. Though technically there were no women in the crew, dressing like Pilgrim women would work for this song, which would mean simple dresses, or skirts with long sleeve shirts and buttons down the front, a waistcoat (or vest), stockings and leather shoes or boots, and a coif (linen cap). Both men and women wore flat or ruffled collars on their necks. The captain would also have a waistcoat and captain's hat. 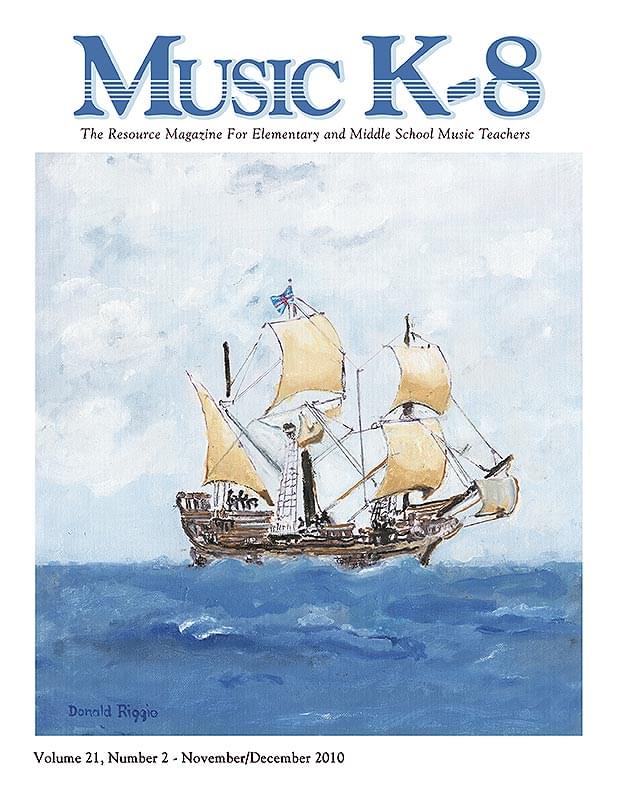