This popular old tune started as a Scottish folk song, and can be found in literature as early as 1715. As with most old folk songs, it has had many iterations, with different lyrics and melodies. In general, it was a man who played a ladle, who lived in the moon (possibly THE Man In The Moon), and whose clothing was made of food. That ladle was likely a large wooden spoon in the old versions, though metal utensils were also in existence. Of course, metal was a rarer commodity, so a poor man would not have much metal.

Earlier versions of the traditional song used food common to people in the British Isles, like a hat made of good cream cheese, a coat made of good roast beef, and pants made of haggis bags. (This is an infamous Scottish food consisting of sheep's entrails, onions, spices, suet, and other questionable items stuffed into the boiled stomach, sausage-style.) Later versions of the song used more contemporary foods, and in some versions, his body is made of the food, not his clothing. (For more background information, just Google™ the title. The Wikipedia article is especially nice. See MusicK8.com for a quick link.)

For our arrangement we decided that the tune offers us several possibilities for fun and musical growth. We started by updating the lyrics to foods kids are familiar with. Then we decided that eight verses of playing a ladle could be a little boring, so we gave your performers a chance to form a kitchen band. Each new verse adds the new instrument to the interlude when it repeats to measure one, with all previous instruments joining in. You can have one player per instrument, or do multiples of them so that everyone has something to play. Of course, it is easier to have multiple shakers than it is to have lots of muffin tins or tea kettles. For easier reading, we have extracted the "Kitchen Band" parts we recorded. You will find them on pgs. 44-45.

Note that at various points you will see upstem/downstem rhythm options. While these don't apply to the two verses shown under the music, they will help you interpret the other verses. Also note the very end of the tune where "Kitchen Clatter" is indicated on the music. We made this cryptic so that you would have more options with your students. The loud noise on the recording was created by dropping a lot of the metal instruments. (You might even hear an "ow!" as one was dropped on the player's toe.) You may just want them to create clatter by playing their kitchen instruments ad lib, or maybe if you would like a "controlled drop," you could have the students drop all of the metal instruments into a box or metal tub. That would be properly loud!

Let us encourage you to adapt this tune in any way you like. Have the kids come up with suggestions for the various pieces of clothing. What would make a funny hat or tie? And by all means, feel free to substitute any instrument for those we chose. Let the students test the utensils in their kitchens for interesting sounds. Be sure to tell them to get guidance and permission from the adults in their family before doing so. Kitchens can be dangerous, and mom may not want a favorite pot banged on with a stick or spoon!

In our experience, older kitchen tools make better sounds. Some of the cheap, new ones from discount stores may lack resonance. Good cheap sources for older things are neighborhood yard sales, estate sales, country auctions, church resale stores, and the like. eBay® is also a possibility, especially if you do general searches for, say, "kitchen utensils" which will bring up group lots at lower prices. You can even decorate them with non-toxic paint or colored tape. Be sure that you don't hurt the sound of the instrument, though.

We chose foods and instruments that led to fairly simple rhythms, either two beats (string beans) or three beats (muf-fin tin). However, you may wish to challenge your students a bit more. If so, pick items that require trickier rhythms. (His coat could be made of pepperoni pizza, for instance.) Let the students figure out the correct rhythms for new lyrics.

We have included some neat sounds on the recording including a penny whistle, bagpipes, solo fiddle, and lots of Celtic drums. However, you could do this all live, with guitars or Autoharps, and if you transpose it to G, it will also work well for recorders. It would also be easy to construct simple Orff parts for the song.

One last thought - either as an extension in your class or an activity for your art teacher, let your students draw or paint their own interpretations of our old friend Aiken Drum. (You'll note that Teresa interpreted him on the cover as Aiken Bear. But then, she's weird.) 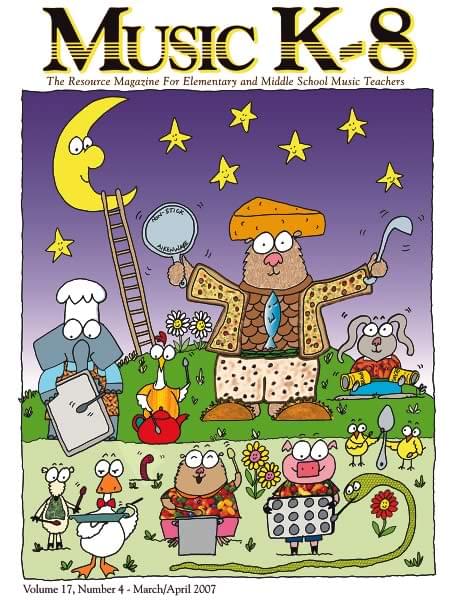