There are many resources designed to help your students learn the parts of an orchestra. There are even communities willing to ship busloads of students to hear the local symphony. This is great stuff, but you'll probably not come across a school district that ships its students out to see the local "battle of the bands" or other rock concert. That's where "Rock Band" comes in.

This song was written to familiarize students with the most common parts of a rock band. While some may argue that this generation listens to enough rock to be plenty familiar with it, it's still a good idea for students to know what the instruments are called and why a rock band sounds the way it does.

To that end, we've incorporated the major rock band components into this song - drums, bass, guitar, keyboards, and vocals. We've kept it simple, as there are many different varieties of rock instruments, and some we don't mention at all. (Some rock bands also include other instruments, such as wind instruments. But we are focusing on basics here.) If you care to be more detailed, you might share with students the different elements of a drum kit (kick, snare, hat, toms, ride, and crash cymbals, etc.). Bass has fretted and fretless varieties, some are 5 string, some are 6 string, and some 12 string. There are electric guitars (which are the most common in rock music and which we feature prominently in this song) and acoustic versions (nylon, steel string, 12 string, etc.). There are also several types of keyboards (piano, organ, synthesizer, etc.). Vocals can be lead vocals or background vocals. All of these components might be appropriate in a rock band, depending on the song and style of the group.

The vocals in this song are a little challenging at times, with some optional divisis. If you choose not to have students sing divisi, the top note is the best way to sing it unison. Having said that, the divisis sound very nice, and are appropriate for a song of this nature.

It is also worth mentioning that while we focus on one style of rock here (which we would dub "power rock" - somewhere between Metallica and Air Supply), there are many forms of rock - from '50s rock to bubblegum pop to hip hop to metal to rock/fusion - there's an awful lot of music under the umbrella of "rock." The line gets blurry when we get into fusion and jazz, but you might share this concept with your students.

At measure 27 we add each component one at a time, so students will know what each one sounds like. A performance idea is to have examples of each instrument on stage. As each one is mentioned, have students pretend to wail on it. We've added crowd sound effects on the CD to transport the audience into a large stadium rock concert. Big hair and sunglasses might also be a fun complement to your performance. This song is intended to be a blast for your students, so encourage them to have fun as they learn. 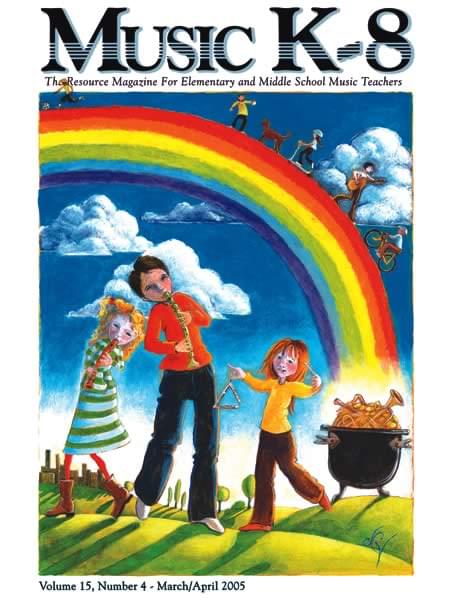