The opening song for the revue has the same name - "This Is America." We wanted to craft a thematic title song that would allow you to create your own patriotic program whether you use the rest of the revue or not. Also, we figured you could choose to focus on different aspects of patriotism. For example, you might wish to incorporate historical themes, such as stories of the early patriots (like George Washington, Thomas Jefferson, or Benjamin Franklin), the American Revolution, the writing and signing of the Declaration of Independence, etc. Or perhaps you'd like to make it more educational for the performers and audience alike. You could include dialog about the branches of the government or the Constitution or voting or why we celebrate The Fourth of July (you'd be surprised how many people don't know). Maybe you'd rather focus on the more human aspects of America like spirit, unity, patriotism, and celebrating our freedoms. You could even do a whole segment on the American flag - its history, stories about it, songs about it, and its role as a symbol of America. Whatever you decide to do with your program, we're hoping that "This Is America" will help to get you started.

The song is a symphonic march and is recorded with orchestra on the Performance/Accompaniment Compact Disc. We have included a condensed score in this issue in the form of the piano/vocal part, but truly it is meant to be performed using the recording for the best effect. We are very pleased with our orchestration and arrangement, and our performers were wonderful. We still get goosebumps when we hear it. It's also a treat to listen to the instrumental version just for the pleasure of it. You could even use it as a teaching tool. For example, students could identify the sounds of the orchestra. (Did they hear that piccolo entrance? How about the timpani?)

As with most of our two or three part songs, we made sure the tune would also work as a unison piece. If the second and/or third part are too much for your students, no problem. Just leave them out. The melody is really quite simple and repetitive, as are the lyrics.

If you are doing the piece with more than one class, consider letting your older students do the other parts. The second part only goes down to an A below middle C, but it might be just the ticket for those 6th grade boys to show off a little. If it's too daunting, have them sing the notes in parentheses instead.

The third part does not enter until the second time at measure 48. It goes up to a high E, so you might want to draft a few older girls to feature. In our experience, girls who can sing those higher notes just love to do it in an exposed part like this.

In all cases, it's important to discuss style with your singers. For example, the first section is meant to be marcato. Teach your singers to support and separate the sound of each word and syllable, except where there are slurs, of course. At sections such as measure 21, the style changes to legato. Have students connect the notes smoothly (as the strings on the recording do), but don't let them get sloppy with their enunciation. (Note: We have deliberately altered the correct syllable break for the word "liberty" at measures 80-82 in order to help students sing the line more appropriately. It is divided correctly elsewhere in the song.)

There is an instrumental interlude from measures 36 to 48 during which the piece changes key. We have suggested on the music that you use this interlude to feature a color guard. This would add a great deal of dramatic impact to the performance, but it is definitely optional. More ideas are presented at the bottom of page 17.

FYI: We do have another good patriotic revue already, which we published many years ago. It is called Freedom and it has been performed by thousands of schools across the country. It had a resurgence in popularity this past year, as did all of our patriotic resources. Here's an idea: If you're looking to do an extended program, consider combining Freedom with some of the other resources as well as some of the music from This Is America. (See pages 70-71 for more ideas.) 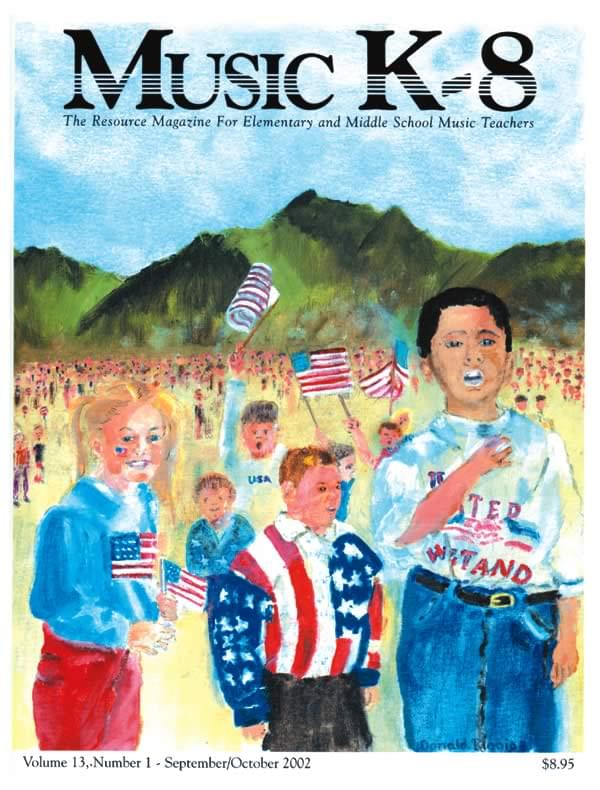