This unique story song is a tribute to the brave people who crossed the Atlantic in 1620. We know them as the Pilgrims. The hardships they faced were unthinkable to us now. They arrived just before winter in a place that was totally foreign to them. The environment was wild and hostile. Indeed, many of them did not survive.

But those that did survive inspire us all with their courage. The tale of their friendship with the Native Americans is legendary. In fact, the celebration of their first harvest together is what we consider the first Thanksgiving. And as we all know, we continue to celebrate this holiday even now, all these years later. That's quite a testimonial.

The song is a gentle, folk style song with a light rock beat. There is a flugelhorn/flute soli line at the beginning which is repeated throughout during the spoken narratives. This line is optionally doubled by unison voices. The syllable ooh is suggested for this part, but you can use whatever is comfortable. If you wish to omit this part, that's fine as the flute and flugelhorn will still be audible (on the recording). You can successfully perform this song without the recording if you wish. We recommend using a C instrument to play the soli line, though you could have another instrument transpose it. Piano is a fine accompaniment, but guitar would be nice, too.

To perform the spoken solos, or narratives, you will probably want to pick two students for each time through. It seems to lay well for this division. You could use just one, if you prefer. We used a total of eight speakers for the four times through. We mixed the age groups of the speakers for variety and interest. The toughest part of the lines will be timing, as you might imagine. You don't want them to be done too soon, nor do you want them to be still speaking when the chorus sings at measure 9 again. This will require a bit of practice, but we feel confident it is do-able.

We have had many requests for a song about the Pilgrims, so we hope that this helps to fill that need. We have taken care to touch on the basic facts only. The details and their continued study are up to you. This is another one that would do well across the curriculum. (There's that music class again, making itself indispensible!) Get those other classes and teachers involved as soon as you can.

Note: We have provided a program idea for Thanksgiving on pages 64-65 of this issue. It includes the song, Pilgrims. 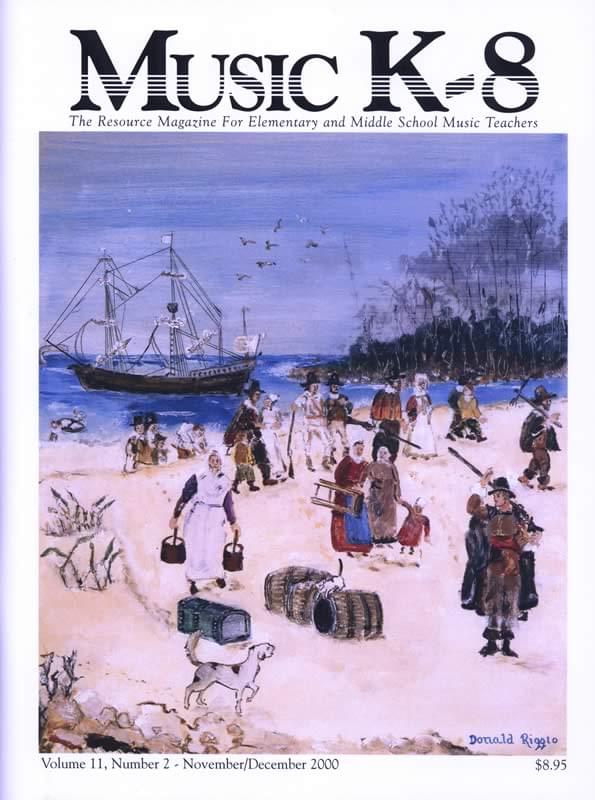