We're very proud of this chart for young singers with big band accompaniment. It accomplishes several things: it brings the study of trains across the curriculum; it gives students a chance to listen for the rhythms that a train makes (another example of music found in everyday things); it offers an introduction or reinforcement of easy part division using spoken words instead of pitches; it provides another opportunity for movement in the music classroom; it highlights the jazz ensemble and swing, in particular; and it lets us show off Paul's extraordinary arranging talents once more! (On a personal note, we also wanted to write a song about trains for our friend, Bob, who happens to be a train aficionado and a trumpet-playing jazzer. We think he likes it okay.)

The piano/vocal is meant to be used as a condensed score only. We realize that it's not playable as it is, nor should it be. This is a jazz ensemble feature and just wouldn't work with piano only. The performance of our jazz ensemble on the recording is nothing short of superb (if you'll allow us to toot our own horns for a moment, so to speak). Whenever we are going to do arrangements like this, we hire extra professionals to come in and fill out our usually smaller group to give it that richer, fuller big band sound. In all, at various times on the recording, you will hear five saxes, five trumpets, five trombones, two horns and rhythm section.

Despite the complexity and high calibre of the accompaniment, the vocal part is quite simple. It is unison everywhere except at measure 39, where it breaks into four parts for "sound effects." The first time, part one begins in the fourth measure by just hissing like steam and then going into the second time with "Chug, chug," etc. The third time, part two enters with a pick-up indicated on the score. The fourth time, part three enters and the fifth time, part four enters. The best reference for learning this section is the recording. Once your students hear it, they'll understand more easily how it works. It is really quite simple, despite its appearance. Be sure to point out to them that the performers on the recording alter their sounds and inflections for interest. For example, the "chugs" are low and guttural. Let them play with various sounds or come up with their own rhythmic expressions instead.

The sounds continue past measure 43 as the ensemble picks up steam and really lets go. It culminates with an energetic "Woo wee!" that falls off into the D.S. and returns to the verse. (Also be sure to make note of the musical responses to the phrases of the verse, such as the dissonant whistle blowing, the pounding on the tracks and the roaring with a rumble.)

The piece ends with the long whistle falling off, though this time it falls off as long as you let it. We suggest four bars, but it's your train. Again, the recording provides an excellent example. Just the drums continue at the very end, imitating the train going off into the distance.

Like the song, "Conga Line," this song offers the opportunity for single file movement in the classroom. It just so happens that a train has the same form: a leader and followers. Have your students scuffle forward in tiny steps to the beat using their arms to "turn the wheels" as they go. Add the movement to the section at 39 only, or bring it in whenever and however works best for you. 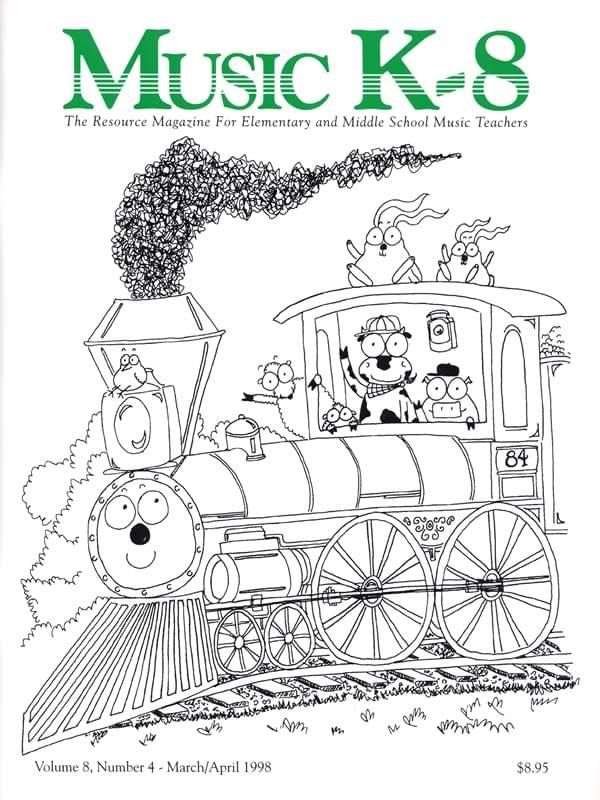