Of all the things we've ever produced, published, or listened to, this song is one of our favorites!

A couple of years ago, we began creating a series of dinosaur songs, which have proved to be quite popular with the kids. Continuing along the same lines, we decided that we would add the flying version of the ancient creatures to our repertoire. Technically, pterosaurs are not dinosaurs, as any knowledgeable student can tell you. But since they did live at approximately the same time, and many of them were as big as dinosaurs, they are equally fascinating.

If you're looking for a way to connect your music classroom to the regular classroom, as many of our subscribers are, try this one on for size. Classroom teachers who are doing units on dinosaurs and other prehistoric creatures may appreciate the opportunity to cross the curriculum.

The song "Pterosaur," begins with the sound of enormous wings. At first, they flap, two flaps to each measure of cut time, so you can feel the down beat of each measure for counting the four times through the intro. The piano goes up an octave to the high C, so that you are sure when you reach measure 3, though if you count the flaps, you will be just fine. The C is also the pitch that your part 1 singers will need to begin in measure 4. Though part 2 is optional, it is not very intimidating, especially when you consider that it is doubled in the winds. Flugelhorns double part 1, and euphoniums double part 2 until measure 21. Play the instrumental tracks only (side 2) for your students so they can hear what is going on behind the voices. Not only will it help them learn their parts, it's just plain cool to listen to.

At measure 25, both parts sing the verse in unison, or just part 1 sings until the chorus. At the chorus, the word "Pterosaur" is spread out over several notes. As indicated at the bottom of the page the first time it occurs, the best way to sing it is by articulating, "teh heh heh heh heh ro sawr." The example of the singers on the P/A cassette is superb and should be used as a model when teaching the song to your students. (FYI: the suffix "saur" should always be pronounced "sawr," not "sore.")

As you might expect, the song decrescendos to the end, with the sound of the giant wings soaring and flapping into the distance. It's a powerfully dramatic ending with lots of room for your youngsters' imaginations to run wild.

(Also FYI: whether or not pterosaurs actually flapped their wings or simply glided is a point of debate among scientists.) 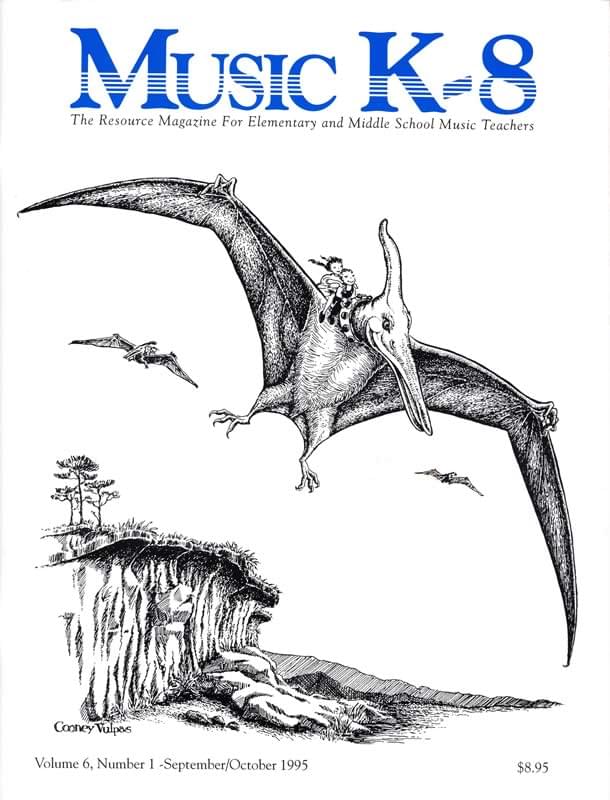