Continuing our series of Jurassic hits, our focus this time is on the gentle brontosaurus, or apatosaurus, as it is also known. These enormous beasts are believed to have travelled in herds by the hundreds, or even thousands, moving together with great vibration and sound - much like thunder. In fact, the word brontosaurus literally means "thunder lizard," a definition given by scientists based on the sound they must have made as they walked.

As you might expect, the song begins with the sound of footsteps approaching from the distance. Multiple marching snares join in to help with the imagery of movement by the parade of creatures - marching, marching. A low rumble of thunder, and a ponderous, low melody begins to tell the tale of the quiet beasts. The first singers to begin are the lower, changing, or changed voices of part 2. They enter with a chant complimentary to the original melody. When the verse starts with part 1 at measure 23, the chant dies out the first time. Low rumbles of thunder continue sporadically as they are announced, "sounding like thunder, thunder." Part 2 rejoins the song as both parts crescendo into the chorus at 39. The half-time rock feel is punctuated by an enormous clap of thunder and its subsequent rumblings. The marching snares disappear briefly, and the two octave bass line becomes predominant. The vocal lines are sung freely, scooping slightly up into the words indicated and then down in a short fall after others. The first loud section gives way quickly to the original gentility as it goes back to nearly the beginning of the song. This time, part 2 stays in through the verse and into the chorus once more. As both parts approach the coda, instead of continuing the decrescendo, they crescendo once more into measure 53, this time joined by the optional solo descant, part 3. Each time they reach the first peak of the chorus, a thunder clap accompanies the beat.

At measure 61, a precise piano/string/harpsichord treble line is emphasized over the soaring descant and pulsating line of the part 1, along with the ongoing chant of part 2. All the parts rise and fall together, back to a quiet chant and a whisper of "marching, marching." The quieter the music gets, the more easily the footsteps are heard. After the final whispered words by part 2, the footsteps go off into the distance, accompanied only by a last few rumblings of thunder.

Though this piece is rather long (8 pages), it is captivating and your singers will be absorbed in it from the beginning. We do recommend, however, that you only use the tape with this song, if you wish to perform it. The piano part is merely a score of sorts for you to follow along as you work with the song. It won't have nearly the impact if you try to play it on the piano only. An exception to this would be if you use multiple synthesizer sounds. You could theoretically play each line using a different sound to come up with your own mix. It would be challenging, but it might be a fun project, especially for your older students. If you're not feeling that ambitious though, we have gone to great pains to make the cassette awesome (as your kids would say).

Every line is played with a unique synthesizer sound, including the vocal lines. That way, if you only want to use part 1, making this a unison song, you can. Be sure to let your students listen to the tracks only version of this song so that they can hear the variety of sounds used. The thunder claps and rumbles are particularly impressive. 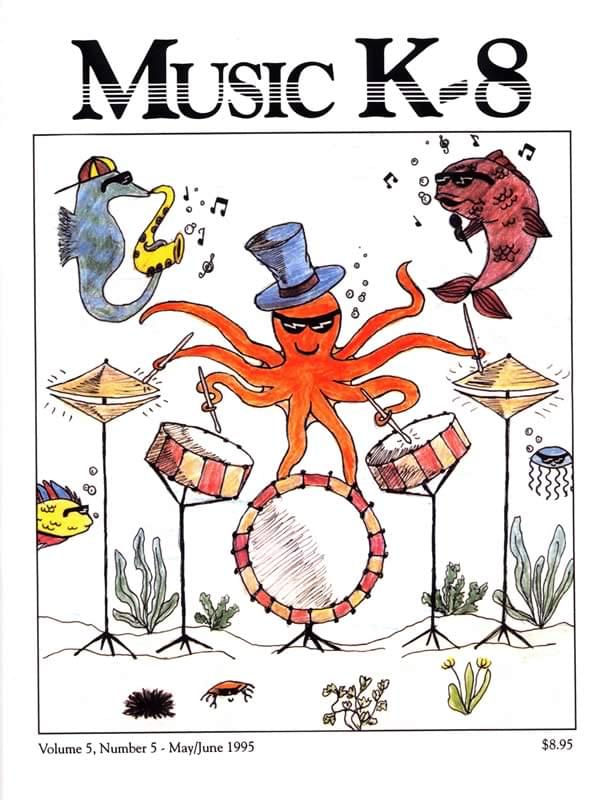