Our States Are Great

As we music educators are completely aware, music is one of the best tools for teaching and learning about a wide variety of subjects. Especially when the content to be learned is in the form of a finite list, it's especially helpful. Such is the case with this song, "Our States Are Great." It includes a recurring refrain and verses that essentially contain the names of the fifty states, in alphabetical order. Truly, a cross curricular gem.

We're also guessing that as music educators, most of you are quite aware of the Broadway phenomenon, Hamilton. Lin-Manuel Miranda has taken a usually dry (for most people) historical topic and turned it into a must-see musical event. His own turn on stage as the ill-fated Alexander Hamilton was nothing short of phenomenal by all accounts. (While we have not seen it ourselves as of this writing, we have enjoyed many previews and snippets of it from various sources. It looks absolutely fantastic.)

Inspired by Miranda's use of contemporary music to tell the tale, we have crafted our own patriotic piece to not only teach the names of the states, but to connect to the rest of the revue. Since the topic is our love of our country, it seemed appropriate to include a song the kids will also love. (So far, so good, judging by early reports.)

One of the aspects of the song that gives it appeal is the rapping. The names of the states are spoken to a rhythm that is written out, which means your performers need to read and learn the rhythms as well as the state names. (Bonus – That makes this a good musical exercise as well!)

The refrain of the song is sung in unison. It's not particularly difficult, and it's catchy. It occurs before, between, and after the rapped sections. One of the trickier parts of reading both the notes in the refrain and the spoken rhythms is remembering to swing the eighth notes. The beat is a triplet-based hip hop, so every eighth note has a triplet feel to it. When in doubt, use the Performance/Accompaniment recording to listen and learn! The drums in particular demonstrate the ongoing feeling of three that drives it. (As long as we're talking about the recording, we want to give a nod to our bass player, Steve Dokken, for his fun and funky bass riffs during the rapped sections. Make sure your kids take note. He's quite fine.)

You will hear that we decided to use soloists to rap the state names – one soloist per four bar section. This allowed us to use several solo rappers, which made them happy. We suggested to them that they put a lot of passion and enthusiasm into their rapping, again similarly to Lin-Manuel Miranda's Broadway vibe. As you can hear, some of them really got into it nicely. If you prefer to use fewer soloists to rap, or even one for all of it, you sure can. Adapt it any way you like. Then, everyone joins in shouting "Great!" in between each section. Be sure you have your groups shout with enthusiasm when they do this.

If you or your students feel more secure doing the rap section together, that's also an option. To demonstrate how that would work, we have an alternate full performance included on the recording (track 31). In this version, each of the "Great!" exclamations are done by a soloist instead. That way, you still have contrast.

Since the meat of the song is basically a memorized list of names, you might find it useful to use a projected list of names for rehearsals, or even in performance. To help you with this, we have created a projectable lyric page in PowerPoint® format which is free to subscribers at our web site.

While any of the songs in the revue would benefit from your own slide show or projected presentation of patriotic pictures during the performance, this one in particular would be a natural. You could show each of the fifty states as it is being spoken. Or show the entire map of the United States and have each state pop out somehow during its mention. If this is too technical for your purposes, a plain old paper map on the wall (large) could be a neat prop. Have a few students standing by to point at the states in question as they are named. (Hey look! It's a geography lesson, too!)

You probably already realize that you can use this song outside of the revue, as it is not specific to it. Mix and match it with other revues, collections, and programs however you like. This also applies to the next two songs. 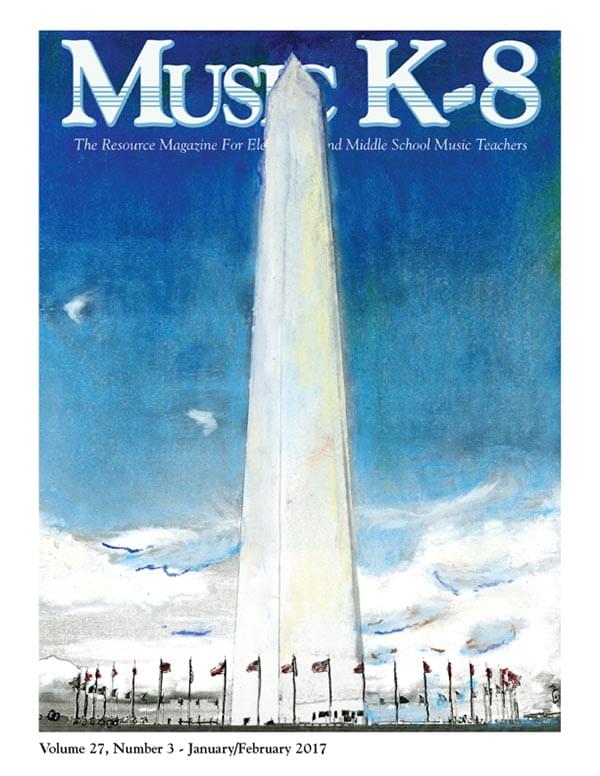