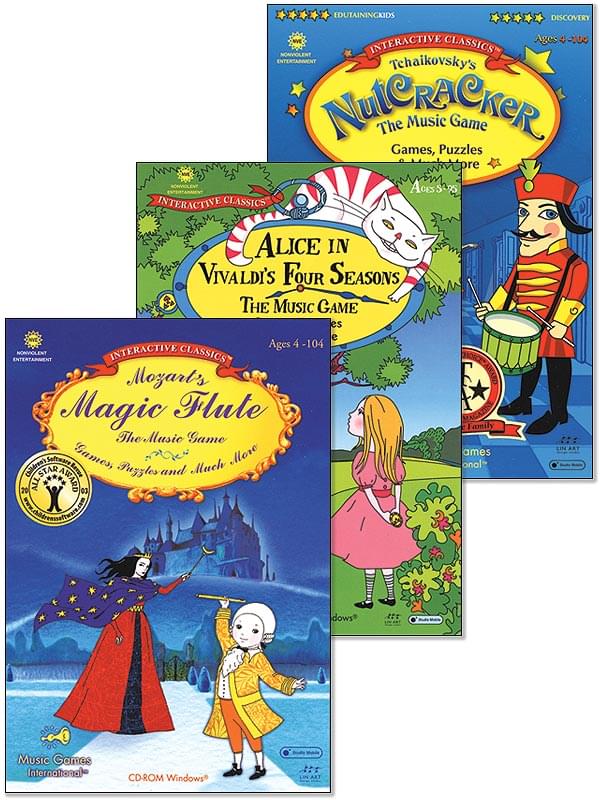 Music is the object of this innovative twist on a holiday classic! Your kids will learn while they play on this CD-ROM about the making of music and the beautiful story of Tchaikovsky's ballet. They'll get to create exciting new melodies or match tunes right from the famous songs of The Nutcracker by putting all the right instruments together.

Filled with countless hours of quality entertainment, this instructive CD-ROM contains nine different games, the original Nutcracker Suite, 16 Musical Jigsaw Puzzles™, Tchaikovsky's biography, The Nutcracker tale in a nutshell, the history of The Nutcracker ballet, the finest music trivia around, and an animated encyclopedia of musical instruments.

A Parents' Choice Gold Award® winner! (All Ages, Windows Only)

Alice walks into a magical Music Clock dropped by the White Rabbit. But the clock is broken, and Alice is trapped inside. The player's task is to fix the Music Clock and free Alice by winning 12 different music games and activities. The games include dozens of innovative music puzzles, really fun music riddles, and brainy mind-teasers brimming with contagious fun and many surprises. Among these special extras are the 12 musical "month puzzles" that correspond to the 12 months of Vivaldi's The Four Seasons.

The Magic Flute will make your students musical even if they didn't think they were. They'll blast through more than a dozen cool Musical Jigsaw Puzzles™, have fun with music trivia, and be able to experience an animated musical encyclopedia. They will play one incredible game after another and learn how composers put music together and even try it themselves!

A Parents' Choice Gold Award® winner! (All Ages, Windows Only)

Kodály In The Classroom (Set 1)